Katoen Natie is a true leader in optical sorting as we offer our customers the most highly advanced sorting technologies available today.
For multiple industries and product types, we identify and remove defective products and foreign material from your prime material by using differences in: color, shape, size, structural proporties, and (bio)chemical composition.

By providing custom-made solutions, we are capable of upgrading your products to the highest-quality standards required by your market applications.

Talk to an expert
Select your product category >> 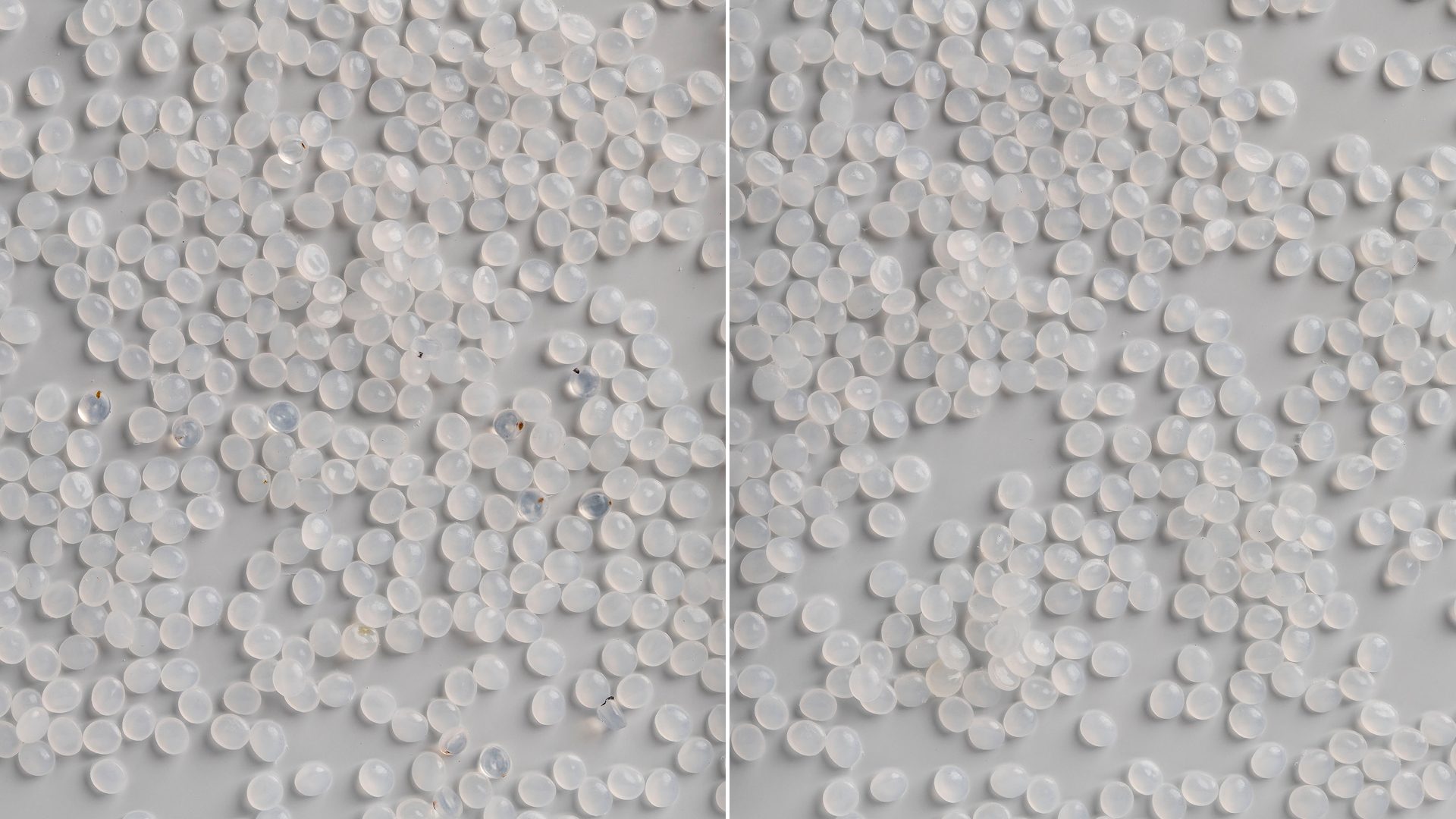 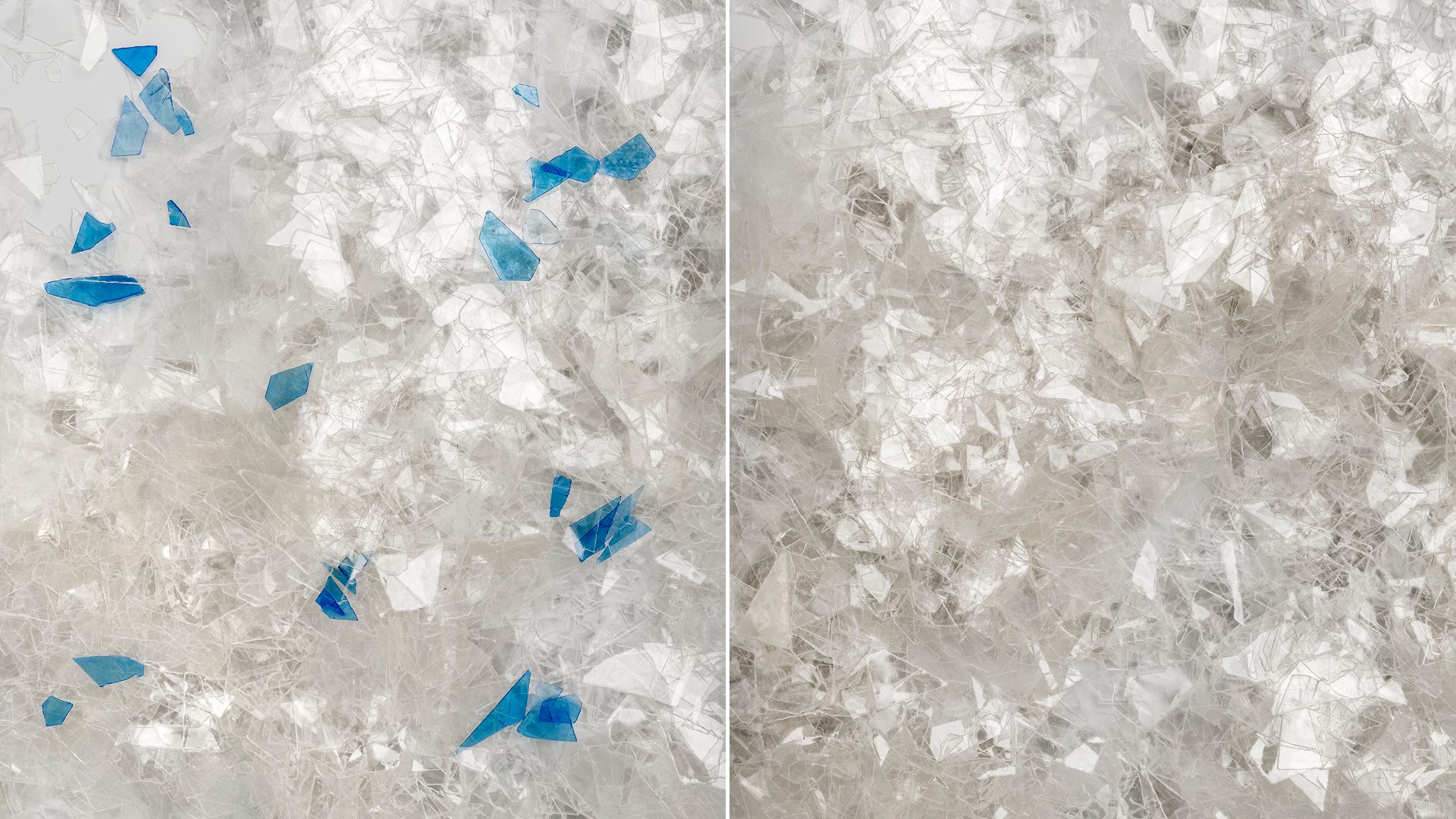 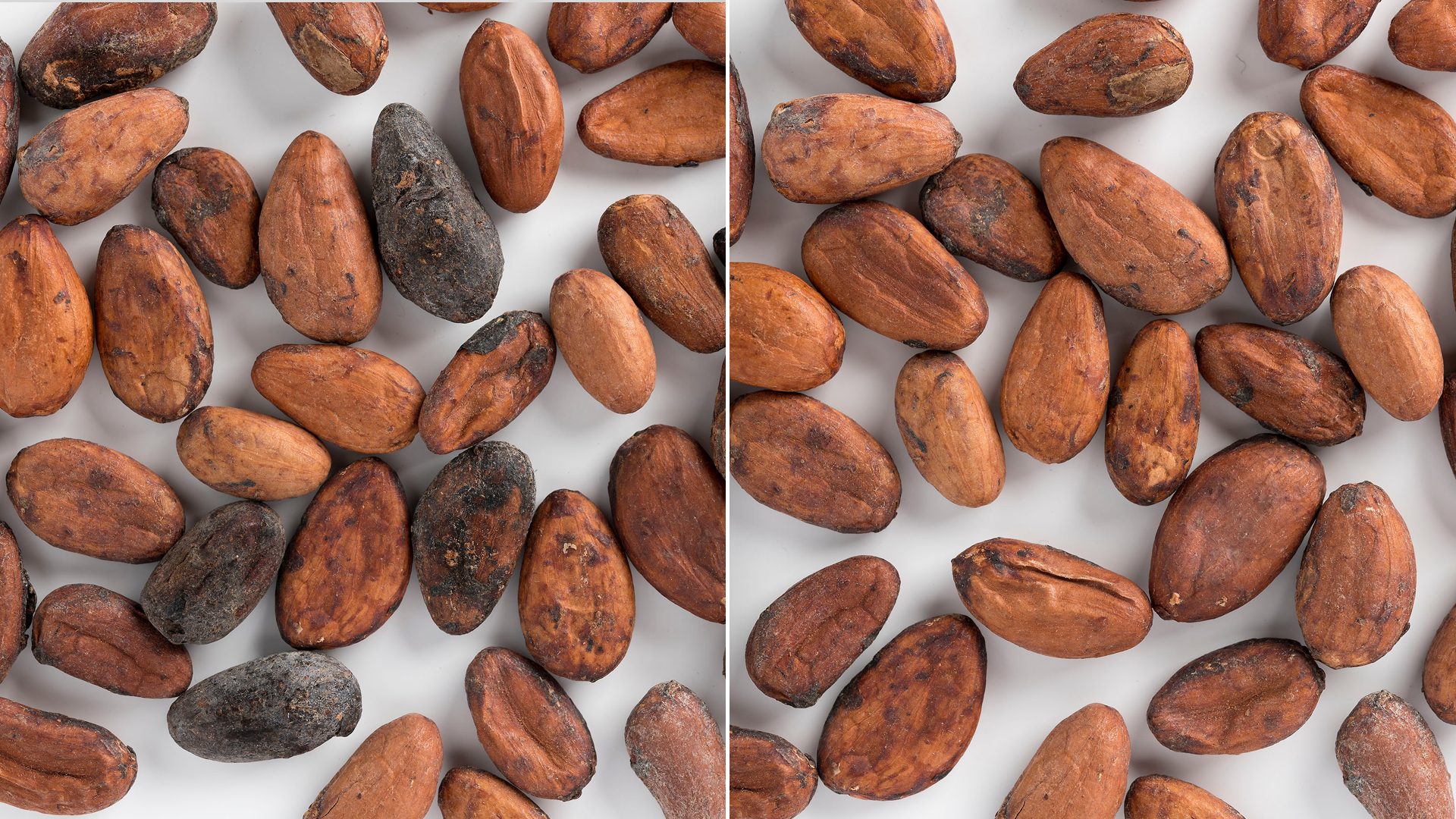 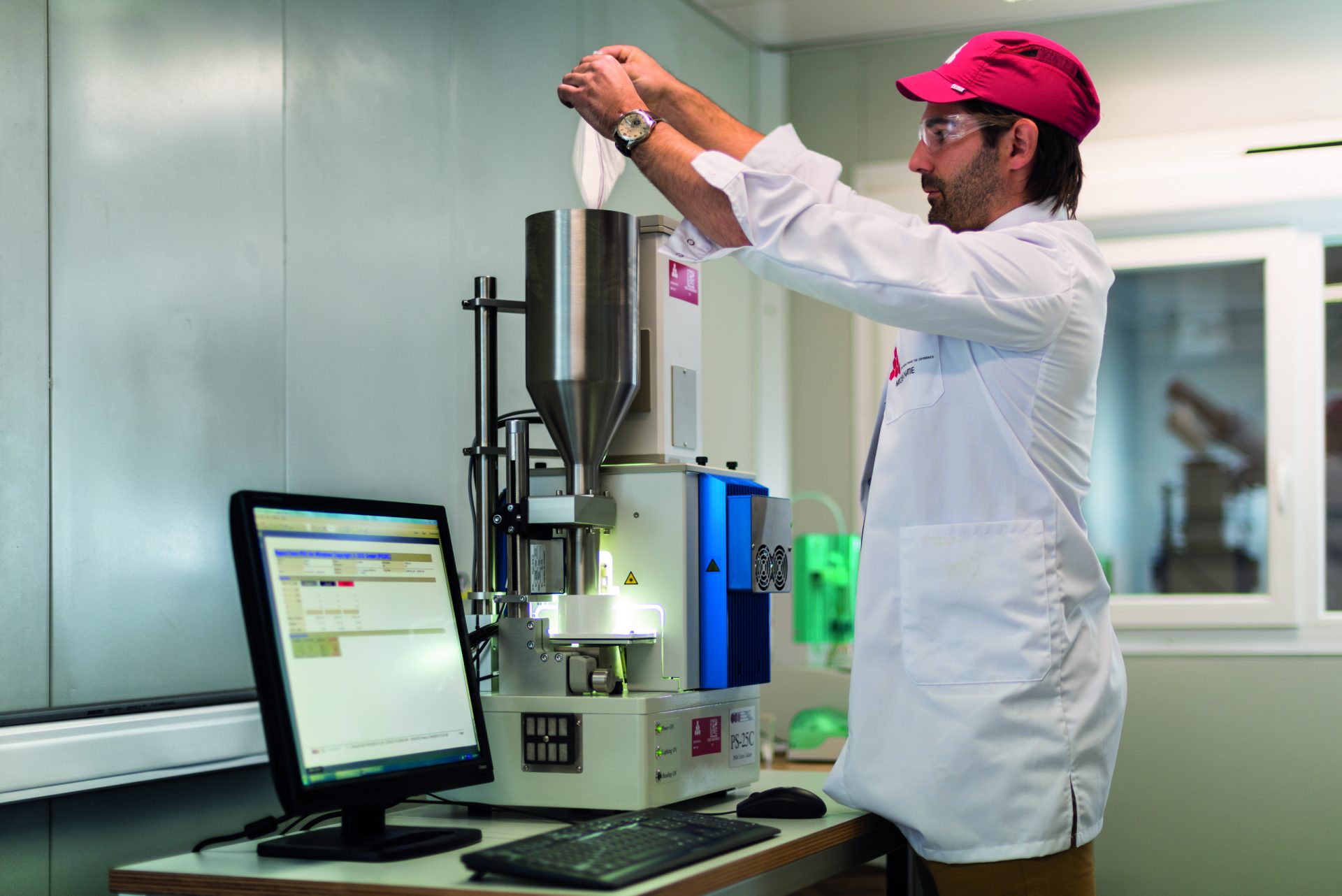 To provide you transparent quality feedback, we use laboratory equipment with ultra-high resolution to inspect samples of your materials for impurities, foreign bodies and/or colour deviations.
You receive the results in detailed data analysis reports. This way you can assure meeting the optical sorting excellence demanded by your customer.

How we do it

Please fill in all fields 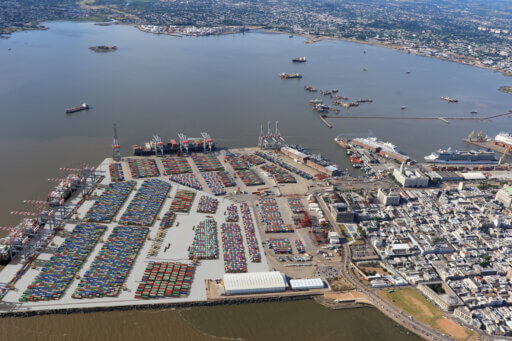 Katoen Natie will invest approximately 455 million USD in the expansion of the container terminal (TCP) in Montevideo.
INVESTMENT PROJECT Last week, Katoen Natie and the Uruguayan Government reached an agreement for a new additional investment in the Port of Montevideo.  This investment project represents the maximum expansion of the concession area, including the construction of a second container yard of approximately 22 hectares in addition to the existing area, and a second quay wall of 700 mts long, dredged to fourteen meters in depth. At the two quay walls, together 1,300 meters, the company will be able to handle four container ships simultaneously, with in time 12 to 15 ultramodern ship-to-shore gantry cranes and 50 straddle carriers (and / or rubber tyred gantry cranes). The new container terminal will have the capacity to load and unload more than 2.5 million TEU per year. The execution of the project will begin immediately and will create many direct and indirect employment opportunities. After the project is completed, the Port of Montevideo will have a ”state-of-the-art” Specialized Container Terminal, which will more than double its annual capacity and will allow TCP to operate the last generation of container vessels (400m). This capacity increase and the concentration of container operations shall improve operational efficiency and reduce container costs, which will place Montevideo in a privileged position on the trade lanes of transit and transshipment containerized cargo. This new agreement allows Katoen Natie to make – for the second time - the biggest investment in the history of the Port of Montevideo, and will be the driving force for Uruguay to strengthen the strategic position of its main regional port terminal as a supplier of efficient port services, making it a reference for the port system of the Southern Cone of South America. “Terminal Cuenca del Plata is already the most efficient container terminal in South America, but with this new investment we are now positioning the terminal as an indispensable link in the list of the most important hub ports in the continent, and, at the same time, making the terminal more attractive for Uruguayan exporters”, explains Vincent Vandecauter, CEO of TCP.  “This enormous commitment confirms our trust in Uruguay as an investment country and one-of--the-places-to-be, and in the Port of Montevideo as an excellent logistics hub”, says Karl Huts, director of Katoen Natie Group.   KATOEN NATIE AND ORIENTAL REPUBLIC OF URUGUAY  Katoen Natie and the Oriental Republic of Uruguay met for the first time in the year 1996, when Katoen Natie first invested in Uruguay, purchasing part of the shares of Zonamerica. Since the very beginning, Katoen Natie was most confident in the success of offering logistics services through the Free Trade Zone system, and soon after decided to also invest in Costa Oriental. The following years confirmed to Katoen Natie that its trust in the potential and stability of Uruguay was well founded, and this was the basis for strategic decisions and more ambitious projects, which prompted Katoen Natie to make a strong commitment towards the country and its future. In 2001 Katoen Natie participated in the auction of the shares of Terminal Cuenca del Plata S.A, to manage and operate the Specialized Container Terminal in the Port of Montevideo, and, having made the highest offer, it became owner of 80% of the company’s shares. This was the beginning of a very important partnership with the Uruguayan Government to transform the Port of Montevideo in the most important regional container hub for the port ecosystem of the Southern Cone. During the first 20 years of the concession term, over USD 250 million was invested to make TCP the most modern terminal in the region.  During this period, the extension of the main quay wall, the expansion of the container yard, the acquisition of 7 gantry cranes, 48 straddle carriers, and a strong investment in next generation technology, resulted in the offering of high-quality services to our customers, and in the best productivity in the region. From 2012 onward, Katoen Natie also developed the Polo Oeste logistics park in collaboration with local partner Frigorífico Modelo SA, where together they have developed 10 hectares as warehouse space and the most advanced logistics hub for the region. Katoen Natie would like to express its great satisfaction with this agreement, which will be the pillar and starting point to definitively put Terminal Cuenca del Plata on the map as the most modern container Terminal in the region.
read more 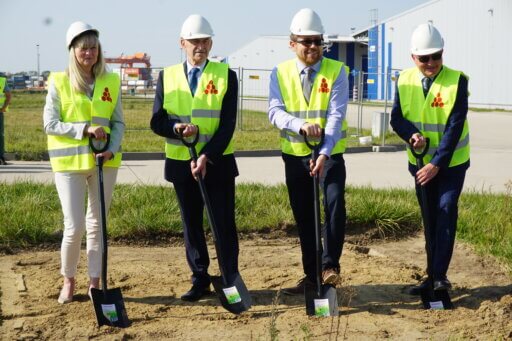 Our in-house created application BOOST supports the Katoen Natie logistics platforms to organize and plan operations such as the loading and unloading of trucks/containers. The booking of time slots is a sometimes overlooked but crucial link in the transport chain. It is a vital touch point for warehouses, carriers and shippers. As our goal is to deliver operational excellence, we strive to improve the time management of all parties. Avoiding congestion and not keeping trucks waiting is a real cost saver, especially as drivers are an increasingly scarce resource. Not to mention the time and money that can be saved by automating the process. In the registration of the trucks nowadays, we often see a structural delay because i.a. the driver does not always possess all (correct) information, such as loading reference, destination, cross border city, … This bottle neck will be resolved because dispatch will be able to input the correct data upfront, so the driver only needs to register personal data (name, license plate, …) and will no longer lose valuable time on registration, calling, etc. With this booking system we strive to speed up the turnaround on terminal of your trucks significantly. Katoen Natie will be able to reserve sufficient resources based on the bookings in BOOST, guaranteeing a fast and accurate service. 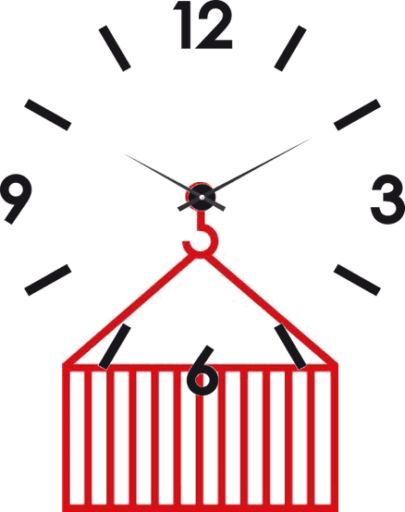 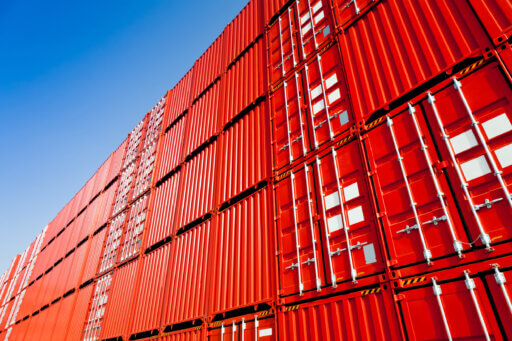 Necessary informationBOOST will start as from the first of September. As from the 1st until the 15th of September our implementation team will guide you through the process to help you in case of any issues. However, after the 15th, the driver will only be able to present himself on site with a registered time slot. We start the implementation of the platform with the empty depot services handlings by truck.

Contact your local BOOST Administrator to obtain a Web login and password. information.booking1227@katoennatie.com For a more detailed manual “How to create a time slot”, download underneath document. https://www.katoennatie.com/app/uploads/2020/08/Manual-BOOST-container-for-user.pdf
read more 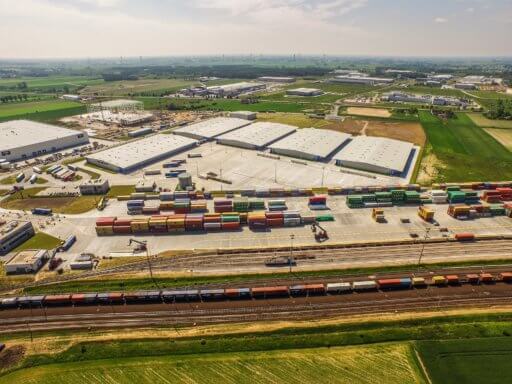 Acquisition logistics centre Nijhof-Wassink Poland successfully completed by Katoen Natie
This acquisition includes besides the warehousing also the value added logistic activities. Katoen Natie will also take over the 60 employees of the logistics center and the current contracts. All transport activities of Nijhof-Wassink and the five Volvo and Renault Trucks dealerships in Poland will remain active under the Nijhof-Wassink Group. The assets include a terrain of 25,5 hectares, 42 silos, 15.000 m² of outdoor storage space and 5 warehouses with a total covered space of 40.000 m². A repacking hall, an office and technical building are present as well. The main activities are storage, handling, transport, semi-industrial and value-added services for the (petrochemical) industry. The facilities are located in Kutno, Poland, strategically positioned next to the PCC intermodal terminal (250.000 TEU capacity) and nearby the junction of two main roads in Poland connecting North-South and East-West. The facilities are directly connected by rail to the main European Ports of Antwerp, Rotterdam, Hamburg and Gdansk/Gdynia. Katoen Natie has decided to expand the acquired facilities in the very near future; additional investments in warehouses with a total area of 16.000 m² and 42 additional silos for storage of polymers. The employees, work processes and facilities of the logistics center of Nijhof-Wassink in Poland are known as a reference in the market in terms of safety, reliability and high-quality services. In order to maintain this high-level standard, an agreement was reached that guarantees continuity, stability and growth for all stakeholders.

With this acquisition the business unit Petrochemicals is significantly expanding its European network of import hubs. Katoen Natie considered Poland as a blind spot in the network. By filling this blind spot, Poland is now an extra asset to serve petrochemicals customers worldwide. The takeover typifies Katoen Natie's strategy to further expand its services for the (petro)chemical industry, both by investing in new installations and through acquisitions. The acquired company fits in perfectly with the existing Katoen Natie structure, both in terms of geographical location and core business. The integration of the new terminal into the existing Katoen Natie network will lead to greater efficiency and economies of scale, which will further improve the services to customers from all over the world. Katoen Natie strengthens herewith its position as global market leader in logistics for the (petro)chemical industry.
read more 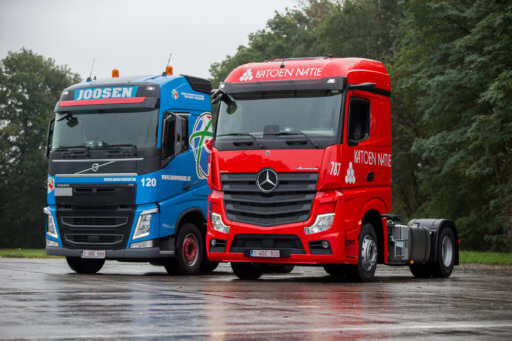 Transport Joosen is a family-owned transport company that is specialized in the transport of sea containers with a strong focus on dock transports. Kurt Joosen's daily professional management includes a loyal team of planners, administrative staff and more than 180 drivers. With their young and modern fleet of tractors and trailers, supplemented by a permanent team of subcontractors and combined with their strong focus on software and new applications, Transport Joosen is one of the leading transport companies in the Port of Antwerp.

In the past, there was already a close cooperation between Transport Joosen and Katoen Natie and this already successful cooperation combined with a similar 'no nonsense' approach in the corporate culture of both companies has led to this acquisition.

Even after the acquisition, Kurt Joosen will remain active as the leading force behind transport Joosen. All employees of Transport Joosen, the entire fleet and all activities of both Transport Joosen NV and Traxlars NV will be fully taken over by Katoen Natie NV.